May 28, 2013
Art
From Infancy to Adolescence, On the Lighter Side, Storypoems

I was a scrawny kid with two left feet
who stumbled over cracks in sidewalks
and could not bear to see
a caterpillar set afire
or a butterfly stripped of its wings.

I was always falling,
from monkeybars and swings
and roundabouts that spun too fast.
There seemed to be a disconnect
between my arms and legs and head.
The doctors said that I had “growing pains”
The children called me “spastic.”

By the time I got to fifth grade,
the bullies in the schoolyard
had marked me down as easy pickings
They jostled me in the hallway
tripped me on the ball court,
and made me roll a marble with my nose
across the locker room floor.

I prayed to God to send a golem
and the Great Bovino magically appeared,
whose Sicilian father,
it was rumored,
stuffed unruly children
in the back of his Good Humor truck
and delivered them frozen solid
to unknown destinations.

We’ve got a problem here
he said to the miscreants,
stop screwing with my friend
or you’ll all end up dead meat.
Capish?
Then, to emphasize his point,
he collared my two worst tormenters
and banged their heads together twice.
It’s two o’clock, he said to me,
let’s get some ice cream from my Dad.
We sauntered off,
his muscular arm around my shoulder,
my feet planted firmly on the ground. 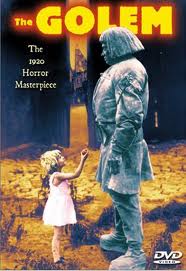